For chatting and discussions.
Reply

most extraordinary about boka was his incredible speed, fluidity and musicality which is unparalleled by anyone. he was one of very few people possessing impeccably clean technique while playing at great speed. yet he didn't overplay. his skills were sought out by students of the djembe the world over, including france and italy, where he gave some memorable workshops. boka chose, however, to remain in guinea and pass on his knowledge to the new generation, founding the group boka juniors, with his students.

at only 33 years of age at the time of his death, boka was probably the greatest guinean djembefola of the younger generation during his time. yet he remained very humble and always gave huge respect to his elders and teachers. he spoke with utter respect of lopez soumah, sekouba camara and mamady keita.

it is tragic that boka died so young but he left his imprint on the manding percussion music and leaves a legacy behind with his many students. boka managed to record 4 cds, being 'allah nana' with his group boka juniors, 'djembe kan' with mohamed bangourake, 'keyim ba' with sibo bangoura and 'respect' with abdourahmane bangoura and other great young artists of matam. may his soul rest in peace.

boka solos at a post workshop performance in milan, april 2007

playing alongside his friend babara bangoura at the same performance 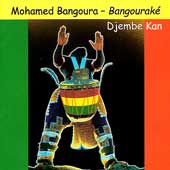 [video]www.youtube.com/watch?v=UTjpgBowRdc[/img]
boka at a performance in milan with babara bangoura, ismael bangoura, epizo bangoura, naby camara and others


boka and babara bangoura in a krin duo


boka leading his group, boka jrs, at a spectac at the house of les etoiles du fareta, 2004


boka jrs at a spectac in conakry, showing what they can do without their teacher

He was amazing. His talent and musicality was really, really rare. He was a monster, and all the young jembefolaw in Conakry copied his style and his licks. But I've never heard anyone else that could play like him.

"If you knock long enough, eventually the door will open."
Tasumakan - Djembe and Dunun Video Lessons

here's 18 mins worth of old footage showing boka in his youth with the percussions juniors de guinee, along with mohamed and ismael bangoura (please be patient for videos to load).

playing alongside his friend ismael bangoura at the same performance


that's Babara Bangoura, not ishmael.
should i shave my moustache?

Do you know where to find the "Allah Nana" cd he did with his Boka Jrs. group, and the "Respect" one with A. Bangoura?

Here's a nice one from the same YouTube channel, of Boka training a group of Senegalese drummers. You can see the humility and respect around Boka.

[video removed due to double posting. see video in this post above]
"If you knock long enough, eventually the door will open."
Tasumakan - Djembe and Dunun Video Lessons

I just heard that Boka has died and I feel very sad. I had promised him to see him again within 10 years. Please, if anyone knows a little more about how he died I would love to hear more about it. Please email me at djembemaster@hotmail.com or private message here. I have original recordings from our lessons together with Ismail and his students.

This is so sad. Is there any word on what happened?
The Big Bang